A quick look at Argentina

Argentina has a wine history that stretches some five hundred years back. In the middle and latter part of the 19th century a lot of immigrants came to Argentina from Spain and Italy. They brought with them, among many other things, their wine culture and grape varieties.

In 2016, Argentina was the seventh largest country when it comes to area planted with vines, 224.000 ha/553,500 ac. Most of the harvest is used for wine production. 9.4 million hl of wine, made Argentina the ninth largest wine producer in the world (a decrease of twenty-nine percent in volume from the previous year).

Overall, black grapes are increasing (up 10% in nine years), while green and rosé grape varieties are decreasing in acreage; both Green and Rosé varieties have each lost 18% since 2008. Examples of rosé grapes (“Rosados”), are Cereza, Criolla Grande, and Pinot Gris.

Make sure to not confuse the rosé grapes with rosé wine. Rosé grapes have a pinkish skin. Rosé wine is made from black grapes where the skins remains in the must for just a few hours, leaving the must with a pink color but very little of tannins.

Green varieties with the largest acreage are Pedro Gimenez (nevertheless down 21%), Torrontes Riojano*** (+/-0), and Chardonnay (+/-0). Moscatel de Alejandria is another big looser (down 37%).

Bonarda, a synonym used for the French variety Corbeau

Changes in acreage is said to depend largely on wine growers replacing “old” varieties with grapes that more adapted to their land and soil. Growers are also good at listening to what the market is asking for. 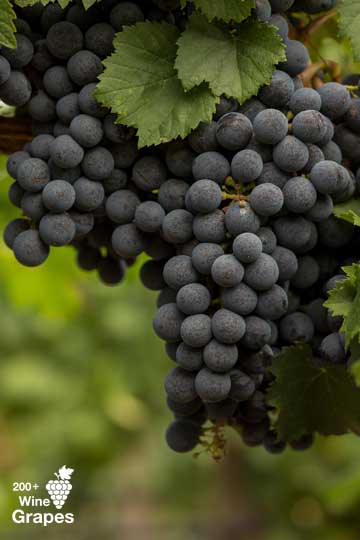 Irrigation, predominantly from rivers, is a must as rain is scarce. Precipitation is only some 230 mm (9 inches) per year, out of which some 60% falls from December to March. Yearly sunshine hours are some 2870. With only forty-five days of rain annually, rain close to harvest is normally not a problem.

Soils are generally of rock and sand, e.g. poor. Vines have to fight, not only for water, but for nutriment as well, which is helps in increasing grape quality.

In Mendoza, wines are grown on altitudes as high as 1500m / 4900 ft. Most vineyards can be found on altitudes between 600-1100 m / 2000-3600 ft. Higher altitudes means days with slightly lower maximum temperatures as well as a larger difference in temperatures; from warmer (day time) to cooler (night time). The result is very good conditions for wine production. In general, grapes grown on an altitude give harvests with higher quality compared to “low land” grown grapes.

Harvest time is mainly in February, with wine festivals commonly being arranged the first days of March.

Most planted black wine grapes in 2017

There are several varieties on the rise, promising that Mendoza will continue to be a very interesting part of the wine world.

Most planted green grape varieties in 2017

Apart from Torrontes Riojano, no green varieties are reported to be increasing in acreage.

Most planted rosé wine grapes in 2017

Where to find the best wines in Mendoza?

Malbec has a firm grip on Argentinian wine production, and Mendoza has undoubtably become its heartland. You can find really good Malbec wines from many parts of the region. However, the best red wine, both Malbec and Cabernet Sauvignon, is said to come from either Luján de Cojo, just south of Mendoza city, or Uco Valley (further south from Luján de Cuyo). Tupungato is an example of a high altitude, small city, that produces delicious wines. The high altitude wines from Uco Valley tend to be intense and aromatic, distinct in fruitiness, and with good ageing potential. Wines from Luján de Cuyo tend to be more generous and richer in their fruitiness (but not of the jam style you can find in wines produced in lowland areas), and with good ageing potential as well.

High altitude grown Chardonnay also produces very nice wines in the same areas, especially when from Gualtallary or Tupungato, where vineyards are at 1300-1500 m / 4300-4900 ft above sea level.

If you travel south from Uco Valley, you will find very good wines made from Torrontes in Paraje Altamira in the district of La Consulta, not so far from the southern part of Uco Valley.

*     The grape’s real name is actually Cot. For convenience its more wellknown name Malbec is used in the article.
**   Bonarda’s real name is Corbeau. For convenience the Argentinian synonym Bonarda is used in the article.
*** Download the 200+ Wine Grapes app if you are interested in learning more about the – for most wine drinkers – not so common grapes in the article; Ancellotta, Aspiran Bouschet, Bonarda/Corbeau, Cereza, Criolla Grande, Malbec/Cot, Moscatel Rosado, and Torrontes Ríojano.